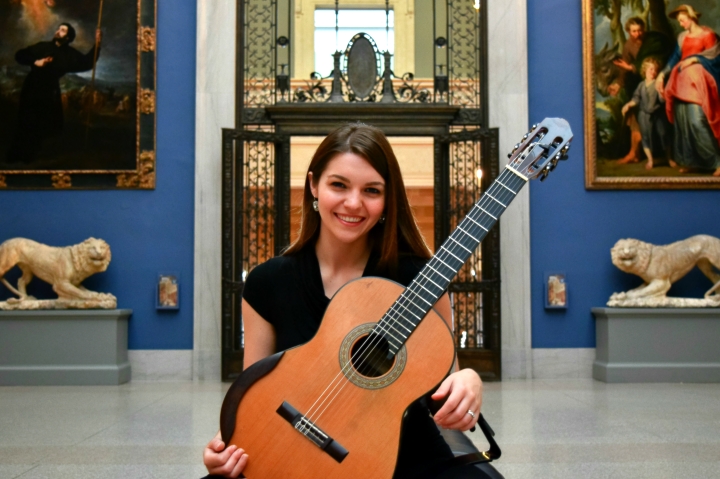 Jaclyn has been performing solo and chamber music for over 10 years. Recently she was selected to perform solo and chamber works for a historic concert in celebration of legendary composer Leo Brouwer’s 80th birthday. She played for the NJ Guitar & Mandolin Society, Connecticut Guitar Society, and on a La Bella Strings sponsored concert series, as well as masterclasses for renowned artists such as Oscar Ghiglia, Scott Tennant, Leo Brouwer, Odair Assad, Antigoni Goni, the Brasil Duo, and Jorge Caballero. Ms. Jones was also a guest artist on WPAA-TV’s Music with Purpose show and has played at notable venues such as the Wadsworth Atheneum Museum of Art, the Buttonwood Tree Performing Arts & Cultural Center, the Eric Carle Museum, the Simsbury Historical Society, and the Augusta Curtis Cultural Arts Center.

Jaclyn earned her Master of Music degree and received performing arts scholarships from the Hartt School of Music. She studied with award winning guitarist Christopher Ladd in the oldest guitar program in the country. She also completed her Bachelor’s from Hartt with scholarship under program founder Richard Provost, and was selected to perform in several 20/20 Honors Chamber Music concerts.

In addition to performing, Jaclyn is very passionate about teaching and has over ten years of professional experience. She currently teaches guitar at the Ethel Walker School and Martocchio Music in Simsbury, the Community School of the Arts in Mansfield, and privately throughout the Hartford area. She was a featured guest teacher running a Technique Workshop at the Connecticut Guitar Society’s Guitar Day, founded the Grace Academy Guitar Department in Hartford, and taught at Soundcrossing Studio, the Greater Hartford Academy of the Arts, and Music & Arts.

As well, Ms. Jones founded the Simsbury Historical Society concert series and was the Music Director for two years. She enjoys volunteering and has performed for patients at the Jefferson House at Hartford Hospital as well as the Hospital for Special Care. Jaclyn plays a 2009 cedar guitar built by Alan Chapman.